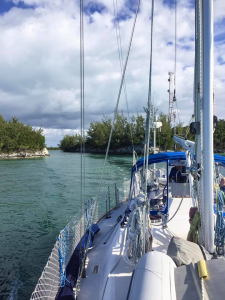 After weathering Hurricane Matthew in 2016 at Great Harbour Cay (GHC) Marina, Captain Joe and I decided to stay in the Bahamas for season two, and visit some new places not yet seen.   We also wanted to improve our sailing and cruising skills, and figure out what changes or improvements to add to MAHI later this year.

We took off from GHC, and spent some time in the Berry Islands, before making the passage over to Eleuthera.  We knew a big storm was coming, so we wanted to seek all around protection in either the marina at Spanish Wells or at Royal Island.

Here is our view out MAHI’s master berth porthole in the anchorage.  I woke up, turned my head, then grabbed my camera: 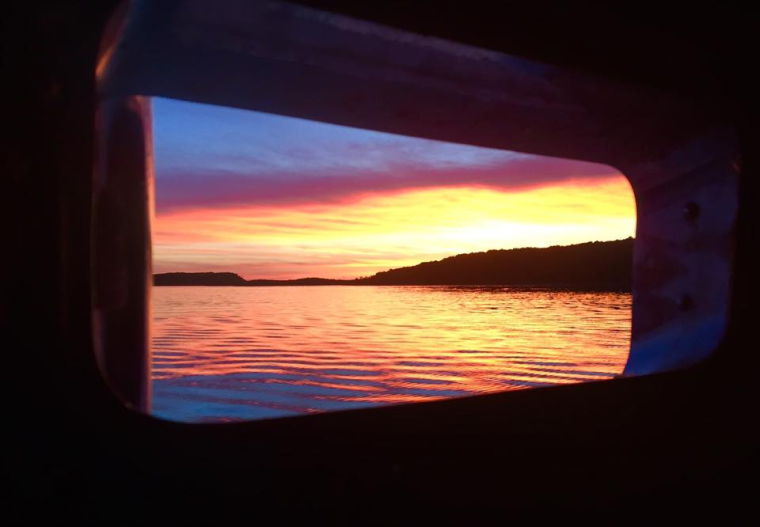 View in the Royal Island Anchorage

Moments like this are why we live aboard our sailboat for a majority of the year.

The expected storm turned out to be much stronger than predicted, with winds just under 80 knots per hour at its worst.  The story about this event is saved for another day. S/V MAHI at anchor in Eleuthera

We spent about a month touring Eleuthera and waiting for a weather window to go to Cat Island.  Basically, we spent time ducking storms in safe anchorages and waiting in vain.  So, we headed to the Exumas, and then sailed MAHI back to Great Harbour Cay to fly home for a family wedding.

Once back, we spent more time in the Berry Islands, then over to Eleuthera, then north to the Abacos.  Now, with the 2017 Hurricane season upon us, we just arrived back to Great Harbour Cay since it is such a wonderful hurricane hole.  We fly out in a week once we prepare the boat for any potential named storms.

Promise to catch up on all my travel posts.   Many days, you are living the dream out on the hook in beautiful locations, and your days are spent with boat school, snorkeling, swimming, beach combing, socializing, and touring on land.  Blogging get set on the back burner as you live each day.  Stay tuned for more posts!

← Preparing Your Boat For Summer
Year 6 of Cruising! →